The rich history of Greater Refuge Church, initially called Mother Refuge Church, extends back over 50 years. Our heritage began in 1943, under the leadership of the late Bishop and Apostle John W. Pernell. A great teacher and builder of men and women, he inspired many to carry on the work of God through his teachings and instructions. Bishop Pernell served until October 1969 and resigned from the Church of Our Lord Jesus Christ of the Apostolic Faith, Inc. in that same year.

The ministry continued after October of 1969. The first meeting was held in Allen's Blue Room where our faithful deacons: the late Arthur Lewis, Nathan Washington Jr., Walter Jasper, and the late Joseph Crawley served. The late great, Bishop William L. Bonner was called to provide leadership and help the church regroup. Services were held at Mount Calvary Holiness Church on Fairmount Avenue. Prayer meetings and morning worship services were also held at Lightfoot Funeral Home. A house of worship was desperately needed. After his arrival, Bishop Bonner immediately began looking for a church building. The Lord blessed us and we purchased the building at 2701 Garland Avenue, Richmond, Virginia.

Bishop Bonner served as Pastor for 5 years, while traveling between New York, Detroit, and Richmond. He was a great leader and a powerful inspiration to the church. The late Elder Roosevelt Peters served as our first Junior Pastor in 1970, and Minister Samuel R. Peters, Sr. served as Youth Minister in 1970 and as Junior Pastor in 1971. Minster Samuel R. Peters, Sr. was ordained an Elder in Detroit, Michigan in 1972, and was appointed Assistant Pastor that same year. Assistant Pastor Peters served from August of 1972 until October of 1974.

Bishop Bonner resigned as Pastor on October 8, 1974 and appointed Elder Samuel R. Peters, Sr. as pastor.  Elder Peters, affectionately called Pastor Peters, was appointed and installed as he endeavored to lead the congregation forward. His first task was to renovate the sanctuary and purchase church furniture. The Lord blessed the efforts of Pastor Peters, and the congregation burned their first mortgage in 1982.

In 1985, Pastor Peters had a vision for a new sanctuary next to the church because our upstairs sanctuary could no longer meet our needs. He designed and was general contractor for the new sanctuary. The deacons and brothers of the church worked to make the vision a reality. When the sanctuary was complete, the congregation moved its worship services from the second floor of the old church to the first floor of the newly constructed sanctuary. The sanctuary was easily accessible for the handicapped and could easily accommodate going home services for the people of God.

In 1990, God gave Pastor Peters yet another vision for a new church. He informed the congregation that it was time to rebuild. He had a vision for the new building, consulted with an architect, and had plans drawn of the new church. This vision brought the Greater Refuge Church family to its present location at 2210 Carter Street, Richmond, Virginia. While riding one day, Pastor Peters passed the church marquee laying on the ground with a "For Sale" sign that had not been placed there by the church, however, the church was for sale. Pastor Peters immediately began negotiating for the property in March 1995. On March 30, 1996, the Greater Refuge Church family celebrated the Grand Opening of its new church home.

Pastor Peters' vision of having a Family Life Center, Home for the Elderly, and a church that positively impacts the community has become a reality. The Lord has marvelously blessed! There were many trials, but God gave his people great victory. If God had not been on our side, we would not have come this far. Furthermore, the dedication, faithfulness, and prayers of our warriors for Christ and the members of this great congregation, helped us to stand here today. Lastly, we cannot forget the leadership, dedication, and sacrifice of our great Pastor and his family. To God be the glory! 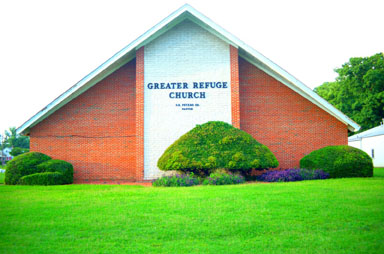